Revisit the Best, Worst and Most Unforgettable TV Moments of 2018

2018 was a crazy year in television, but here's what we'll never forget

Here we are in another December, remembering awesome stuff that happened back in the spring that seemed like it happened five years ago because there are a bajillion shows on at all times. It's crazy to think that even in a year without massive hits like Stranger Things and Game of Thrones, television continued to expand.

More television is always a good thing, but that doesn't mean 2018 didn't produce some horrible TV moments, and try as we might, they're impossible to forget. Below, we take a quick look at the best, worst and most unforgettable television of 2018.

Not gonna lie, trimming the insane amount of television that came out this year to just our 25 favorites was a brutal process, and more than one table got flipped in the TV Guide offices while making the final cuts. But we eventually settled on this list, chosen by the entire editorial staff using a voting system way too complicated to explain here, and it's a perfect example of how diverse television has become.

We let you, the fans, decide this important category for us, and Supernaturalbeat some serious competitionby racking up the most retweets and likes on TV Guide's Twitter account .

Couples from Grey's Anatomy, Shadowhunters, Vikings and more of your favorite shows made the list. Find out how we ranked TV's best romances in the video below. 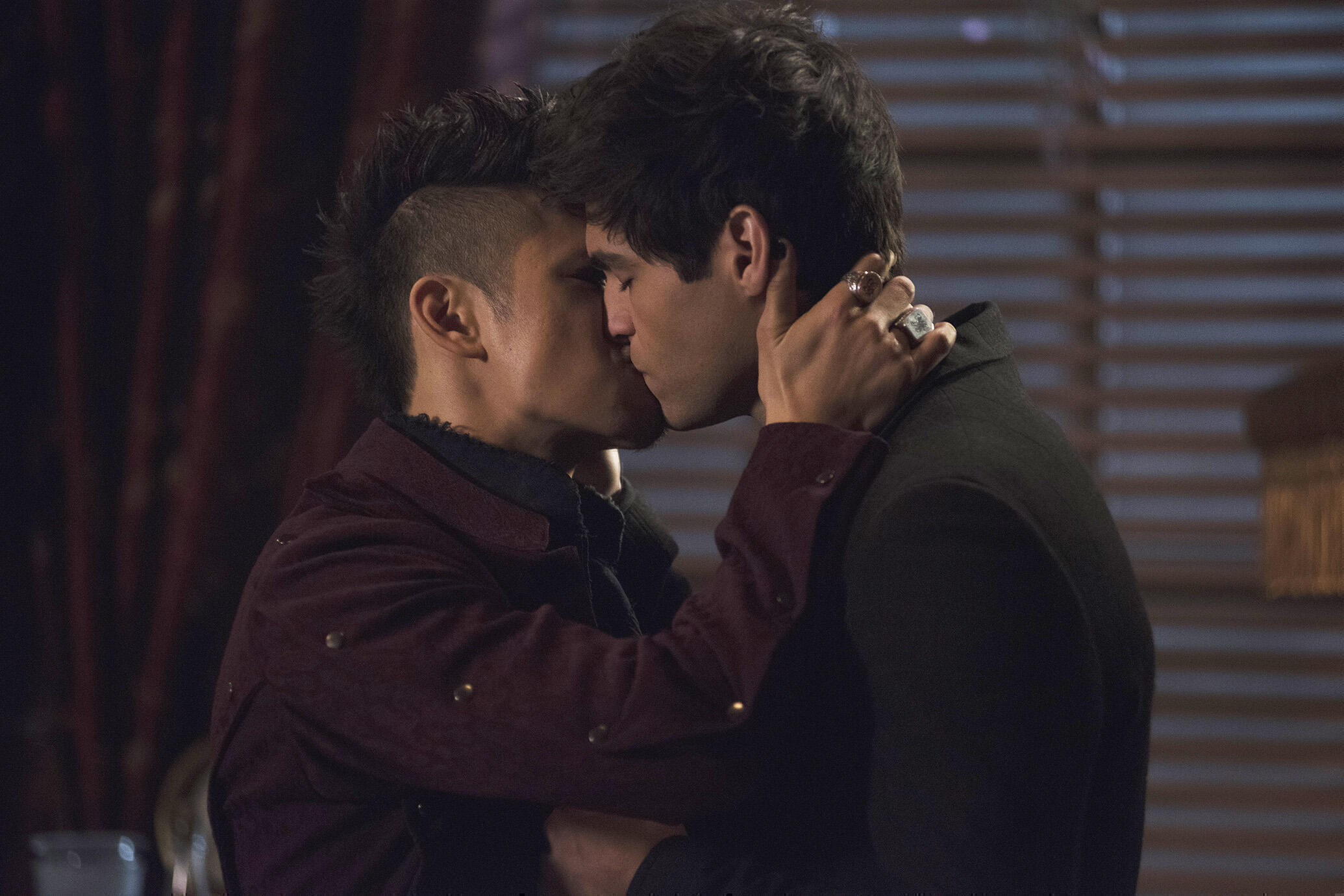 If you've ever watched any kids' television shows, you know that they're full of messed-up sh--. In "Familiar," The X-Files went back to the classic monster-of-the-week format with Mr. Chuckle Teeth, a toy based on a character from a children's series who comes to life and murders people. It's actually a demon, but even if it wasn't, we still would have peed our pants.

It's always a war to win RuPaul's Drag Race, as contestants attempt to out-fab each other at any cost, and all wars have casualties. Asia O'Hara had a splendid idea for the finale to let loose some butterflies from her outfit; that'll show 'em! But the flying caterpillars -- which had to be put in a deep freeze to be imported to her -- never thawed out, and as Asia set up for the finale, they tumbled lifelessly to the ground. Contestants on the show hope for a crown from Fierce Drag Jewels, not letters from PETA.

Worst Reality Moment We're Glad We Weren't Around For

The Real Housewives of New York

The ladies of RHONY vacationed to Colombia this year, and it was a literal sh--show. The water, the food, a pool boy, we're not totally sure, but something gave the gals the runs, and thank god they were south of the equator and far from us, because they left... ummm, "traces" of their ailments all over their hotel room. On the floor. In the bed. Places that weren't toilets. Gross.

TV would be pretty boring if it didn't have any actors in it, so let's give it up for the ones who were the best , OK?

Ruth Wilson played a major character on Showtime's scandalous series. Emphasis on played. Despite being one of the two leads, her character was surprisingly killed off in The Affair's fourth season, and we still don't know why. DUN DUN. Wilson said she's not allowed to talk about why she was leaving the show, which is a legal workaround of an NDA, and the bigger story of what actually happened may never be revealed. It's the best cliffhanger of the year, and one that likely won't be resolved by the time the next season airs.

Runner-up: Whatever happened between Clayne Crawford and Damon Wayans Jr. on Lethal Weapon.

People were going to be pissed off over Jack Pearson's death no matter what, so NBC's drama decided to give viewers a physical target for their anger in the way of a faulty Crock-Pot that set Jack's house on fire. It was This Is Us' way of deflecting, by saying, "Hey, don't blame us, blame this evil Crock-Pot!" The company was forced into face-saving PR, and the show itself came to the slow-cooker's defense, but it was too late. Crock-Pots were hurled out of windows in fear, and the Instant Pot took over. You have blood on your hands, This Is Us.

The start of The Good Place's third season was all about getting the gang back together on Earth, and the persona Michael's (Ted Danson) used to lure Jason (Manny Jacinto) to Australia was so bad it was good. Zack Pizazz was a sleazy talent scout, and Michael looked the part: gray floppy hair, sunglasses at night, popped collar on a leather jacket. It was hideous, and of course, it worked.

As Castle Rock's "The Kid," a mysterious interdimensional being who might be the Devil, Bill Skarsgård made the artist's choice to give his character a physical trademark: acute shoulder asymmetry. It's never explained or even talked about; not once does someone ask if he's miming a DJ with one ear on his headphones about to mix in his next sick track. And in the season's ninth episode, which visits a normal version of his character in the alternate universe, his shoulders are square as a level, meaning the disfigurement is there for a reason. Actors will often add physical tics to their characters, but most don't have to spend all the scratch they earned for the role on a chiropractor afterward. His sacrifice is our gain; it's the ultimate bar for shoulder acting on TV.

Even the best shows take an episode off here and there, and conversely, some of the not-so-best shows surprise us with hours we never saw coming. This is the list of 25 best episodes of television we saw all year.

Best News We Heard All Year

Dan Goor's zany cop comedy was the saddest casualty of Fox's shift away from single-camera comedies as it prepared to be absorbed by Disney, but NBC was all, "Thank you!" and snatched Brooklyn Nine-Nine right up. We're expecting the transition to be seamless as it changes networks for more of the same action we love, and we can't wait to take it all in. (Name of your sex tape.)

Worst Time to Be a Prisoner on TV

The single most complicated scene to shoot in 2018 started several minutes before the halfway mark of the fourth episode of Marvel's Daredevil's third season, and ended with about a third of the episode left. It's a monster one-take shot set during a prison riot that's nearly 11 minutes long. Firebombs fly, smoke grenades go off and, of course, Matt Murdoch is in the middle of it all, punching people in the face. But for the whole thing, it's Daredevil, us and a camera operator trudging through chaos. It's so long, it doesn't even fit into one YouTube clip.

That surprise return, Jane the Virgin

Nothing should be off-limits given Jane the Virgin's telenovela roots, but no one expected the final moments of the Season 4 finale. Jane's ex, Michael, who died at the start of Season 3, was actually alive and right in front of Jane. That's all we know. Whether that really is Michael (Brett Dier) and where he's been all this time are still mysteries, as the season ended on that shocker. We've been letting out one constant scream since.

Best Use of an Intestinal Parasite

For a weird moment to stand out in a weird show like AMC's Lodge 49as the show's weirdest moment, it better be pretty damned weird. The setup here is crucial: We thought Blaise (David Pasquesi) -- the hippy-dippy alchemist of the lodge -- was telling a tall tale about having a parasite rummaging around his gut for several years, and then we were misdirected by his immense nervousness about public speaking before the group for most of the episode. So when the moment came and this happened, it was just as surprising as it was disgusting.