Set ten years before 'The Original Series', 'Star Trek: Discovery' is creating a new vision of the future.

How do you design the costumes for a sci-fi show that's set more than 200 years in the future, but takes place a decade before a known future, namely the 1960s-era original Star Trek TV series? Particularly when our vision of the future has changed so dramatically in the intervening 50 years?

It turns out, you don't worry about it too much.

"The goal was to find something that had our own language, our own version of what had come before," costume designer Gersha Phillips told reporters during a visit to the Toronto set of CBS All Access' Star Trek: Discovery.

In 1966, producer Gene Roddenberry launched the first Star Trek with a hopeful, inclusive vision of the future. The crew of the USS Enterprise wore red, blue and gold tops -- the men in black pants, the women in miniskirts. They evoked military dress but spared us all those pesky connotations of war.

Check Out More From Best Costumes

6 Game of Thrones Costumes That Could've Come Down the Runway

As time went on, the TV shows moved into the future (literally -- after the first Star Trek series, subsequent takes mostly took place 100 years later) with simple updates of the basic Starfleet costume, adding mod black bands of fabric and a more unisex look. The Next Generation, Deep Space Nine and Voyager all took place in relatively the same time period, while on Enterprise -- the 2001 series starring Scott Bakula that took place before the original series in the franchise's timeline -- the crew wore jumpsuits meant to evoke astronauts.

"We're trying to honor the original series," Phillips noted, pointing out the gold, red, and blue accents on the new uniform.

Still, Discovery's costumes don't so much ignore continuity, as they feel more familiar to a 2017 audience. 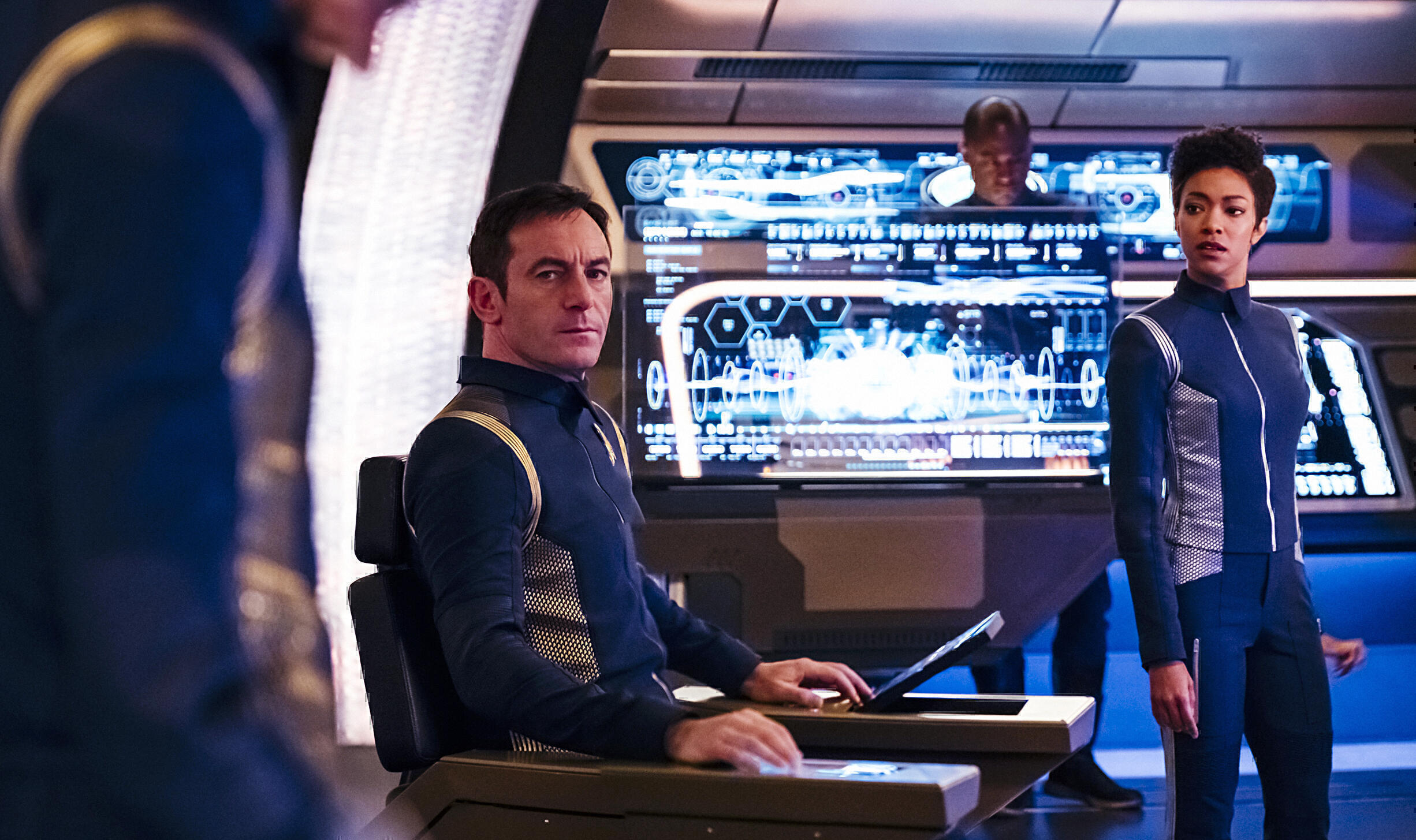 "Part of the fun is [creating a] new uniform," executive producer and co-showrunner Aaron Harberts told us. "We wanted the fans, the cosplayers, to get out there and try something new. Like, you can always pull out your red or yellow shirt... But let's give them a challenge."

And the uniforms as a whole are more muted, part of the darker story line, which chronicles a crash course between the human-led Federation and the burgeoning Klingon empire. Also a factor: The show is literally darker, as cinematographers choose to use mostly natural lighting, which creates more shadows.

"It really is about how they photograph on set," Harberts said.

The first step with the costumes was the colors: gold is command, red is operations and blue is science. From there, they headed into some deeper colors, throughout the uniforms, adding panels to indicate a "body monitoring device." Those devices are made from a corded ribbon inside, with neoprene material on the outside. They're printed with puff paint, then covered in foil. The foil colors themselves have different designations -- cooper is operations, silver is science, and gold is command. And savvy fans will notice something neat, if they look closely enough: The uniforms are textured with hundreds of tiny Starfleet insignias.

Those aren't the only costumes the crew of Discovery will be wearing though. Their workout clothes will be emblazoned with the letters "DISCO," inspired by a surprisingly unrelated shirt a member of the writing staff wore, which led to Harberts nicknaming the ship "Disco." (There are also Starfleet pajamas, which everyone on the crew desperately wants to snag as a wrap gift.)

And then there's the Klingons. When first introduced on the 1960s Star Trek, they were regular actors with Fu Manchu style mustaches. Over time, ridged foreheads were added, as well as more militant looks that connoted a race devoted to war and violence. Discovery doesn't change all of that, but it does tweak things quite a bit. The most noticeable bit is the facial prosthetics, with their even more pronounced foreheads and additional ridges; as well as the revised Klingons' flared nostrils. The costumes have been changed as well, adding for greater diversity of looks -- part of the plot of the show is the reunion of two dozen distinct clans of Klingons.

Phillips pointed out that there are two versions of the same costume: the stunt version, which needs to look as camera ready as possible while still protecting the actors; and the regular version, emblazoned with Swarovski crystals to indicate the reptilian, yet imposing uniforms of the Klingons. Both look seamless on camera, but a simple glimpse inside proves that it takes a lot of straps and Velcro to get the Klingon uniforms to stay on the human actors just right.

It's all worth it though, for that moment with the actors first put on their costumes.

"To put the costume on for the first time was, like, really putting it on!" actress Michelle Yeoh told TV Guide, laughing. She plays Captain Georgiou of the USS Shenzhou, and echoed what a number of the cast members told us: putting on a Starfleet uniform gives you that thrill, that feeling that you truly are a member of the Federation -- but they're also really, really tight.

"My thought was, in the future, there's going to be so much work done on how we look, and how our bodies perform," Phillips said, on the impetus to make the costumes as snug as possible. "It's built in the shoulders so that they stand a little straighter, a little taller. Almost like the Pilates method."

And they had to do Pilates, most likely, because the actors used words like "form-fitting" and "naked" to describe how they feel in costume. But at the same time, it gave them courage to embrace this bold new era of Star Trek.

"The costume, the phaser, the tricorder, my station... All of it is crazy," added Sonequa Martin-Green, who plays series lead Captain Michael Burnham. "They're so beautifully designed. You get all these little firsts. You get the costume. And you get zipped up into it. And somebody hands you a phaser. And then you go to the station and start pushing buttons... It's all so exhilarating."

We wanted the fans, the cosplayers, to get out there and try something new. Like, you can always pull out your red or yellow shirt... But let's give them a challenge.

So whether ultimately the Discovery costumes hit that imaginary sweet spot between Enterprise and TOS, or not; to Harberts, seeing fans at Comic-Con dressed up in their version of the Starfleet uniform means that for this space series, it's mission accomplished. "They are literally going off stills, image captures, and they've nailed it," said Harberts.

'Star Trek: Discovery' Behind the Scenes