In 2017, perhaps more than any other year in recent memory, real-world events lent a poignancy to certain TV shows that would not have been there before. And conversely, television personalities, actors, and creators who typically maintain an air of neutrality used their platforms to discuss real-world issues in strikingly personal ways.

So while many of the shows on this list will clean up when it comes to awards season, and deservedly so, in coming up with our picks for the 25 best TV shows of 2017, we at TV Guide considered a number of criteria, including the impact of a show in the current cultural zeitgeist of America. This means that while we were just as obsessed with The Handmaid's Tale as you were, there are a lot of shows making an appearance which managed the simple feat of making us smile -- a often seemingly impossible task during the crush of negative news that was 2017.

With that in mind, here are TV Guide's top 25 shows of 2017. Entries 25-11 are below in the gallery, but if you want to skip to the good stuff, scroll down to check out our top 10. And be sure to take a peek at the 25 Best Performances of the year while you're at it!

10. Stranger Things
Stranger Things' freshman season was so well done from start to finish that the possibility of a follow-up failing to live up to expectations was paralyzing. But the Netflix series' sophomore outing was another triumph. In addition to the wonderful character development of Steve Harrington (Joe Keery), Amazing Babysitter and Mentor -- the gift we never knew we wanted or needed -- the series also expanded upon its complex mythology just enough that it pushed the narrative forward; but not so much that it wasn't able to still tell an engaging, personal story about Will (Noah Schnapp) and the other central characters. And although we can quibble about Eleven (Millie Bobby Brown) being sidelined during a trip to Chicago, the truth is, the rest of Stranger Things 2 was so delightful and engrossing that we're willing to overlook it. -- Kaitlin Thomas

9. Better Call Saul
Although Better Call Saul has yet to reach the same level of pop culture significance as Breaking Bad, the AMC drama's third season continued its upward trajectory into the pantheon of greats by delivering yet another spectacular installment. Not only did the introduction of future drug kingpin Gus Fring (Giancarlo Esposito) propel the series into the dangerous territory of its predecessor, but the further deterioration of Jimmy's (Bob Odenkirk) relationship with Chuck (Michael McKean) pushed the show's complex leading man into taking his first steps toward becoming the shallow and slippery Saul Goodman. And although this is exactly what viewers signed up for when we embarked on this journey, it's becoming tougher to sit by and watch Jimmy lose himself, which is why by the end of the season we were left anxiously awaiting but also dreading the impending arrival of the Breaking Bad fan favorite. -- KT

8. Legion
FX's freshman drama Legion was a mind-bending exploration of mental illness from inside the mind of someone who may or may not be mentally ill... all wrapped in the ostensible trappings of a Marvel superhero show. The comic book series from Noah Hawley was a creatively ambitious whirlwind of cool retro aesthetics, inventive indulgences and the best performances of stars Dan Stevens' and Aubrey Plaza's careers. It's also unlike any comic book series viewers have ever seen, experimenting in ways few shows are able to. The end product is a unique viewing experience in a world crowded with comic book adaptations... Just don't ask us to actually explain it. -- KT

7. Last Week Tonight with John Oliver
In a year in which late-night comedy, known for its loud and frequent critiques of American politics and pop culture, felt defanged, Last Week Tonight stood tall above the rest. While other hosts and shows were left wondering what they could do when every joke was dismissed as liberal propaganda by the populace that voted Donald Trump into power, Last Week Tonight actually had an answer. In tackling key policy issues, particularly net neutrality, over the course of two standout episodes, the show made a huge impact that was felt everywhere from Twitter to Washington, D.C. After all, there's only one show that caused the FCC's website to crash in 2017. While the issue of net neutrality is still up in the air, Last Week Tonight has already proved it's capable of mobilizing viewers in unprecedented numbers, something fans should look forward to in 2018 as well. -- Krutika Mallikarjuna

6. This Is Us
This Is Us was, once again, the Feel-Bad Show of the Year -- and we mean that in the best way possible. It's the only show on network television that can revel in giving viewers an emotional pummeling week after week... and then consistently get us to come back for more. The Pearsons have earned their place in the canon of TV families we love to welcome into our living rooms every week, giving us all the feels and making our hearts swell even as tears are streaming down our faces. What's most praise-worthy about This Is Us, however, is its ability to tell compelling stories that touch on subject matters rarely depicted on network television, like Chrissy Metz's delicate handling of Kate's struggles with her weight and a high-risk pregnancy, or Sterling K. Brown's Emmy-winning portrayal of Randall as he navigates the the complexities of being the only black member of a white family. The show proves there's no such thing as a "typical" family, and yet somehow its characters are universally relatable. --Liz Raftery

5. Master of None
It's difficult to adequately convey how brilliant and impactful Master of None's second season was, although star Lena Waithe's Emmy speech after her historic comedy series writing Emmy win for the episode "Thanksgiving," might supply provide some insight. "Thank you for embracing a little Indian boy from South Carolina," she told the Academy, referring to creator Aziz Ansari, "and a queer black girl from the South Side of Chicago." As great as "Thanksgiving" was, it was just one game-changing episode in a season full of them. The Netflix series dared to open its sophomore season with an homage to Italian cinema ("The Thief"), proceeded to tell multiple stories about strangers ("New York, I Love You"), and made a provocative statement about religion and second-generation immigrant tension ("Religion"). Not only a perfect example of what seemingly effortless diversity and inclusion looks like, Master of None's second season may just be a glimpse into the future of TV. -- Malcolm Venable

4. The Leftovers
The Leftovers was not made for everyone -- definitely not a low-key, laundry-folding show to have on in the background -- but its themes were also, at the same time, universal. The series was never interested in revealing what happened to the 2 percent of the population who mysteriously disappeared three years before the pilot episode, or offering any easy answers to the questions that plagued the survivors. Rather, it reveled in questions with no simple solutions, the struggle to find meaning in uncertainty, and the human need to rationalize the randomness. It all crested in the final season, as the show's strange, poignant and gut-bustingly funny (really!) three-year journey through unyielding grief, faith and love reminded us that ultimately, it's not a concrete answer that's paramount, but what you believe. Plus, it gave us a d--k shelf. -- Joyce Eng 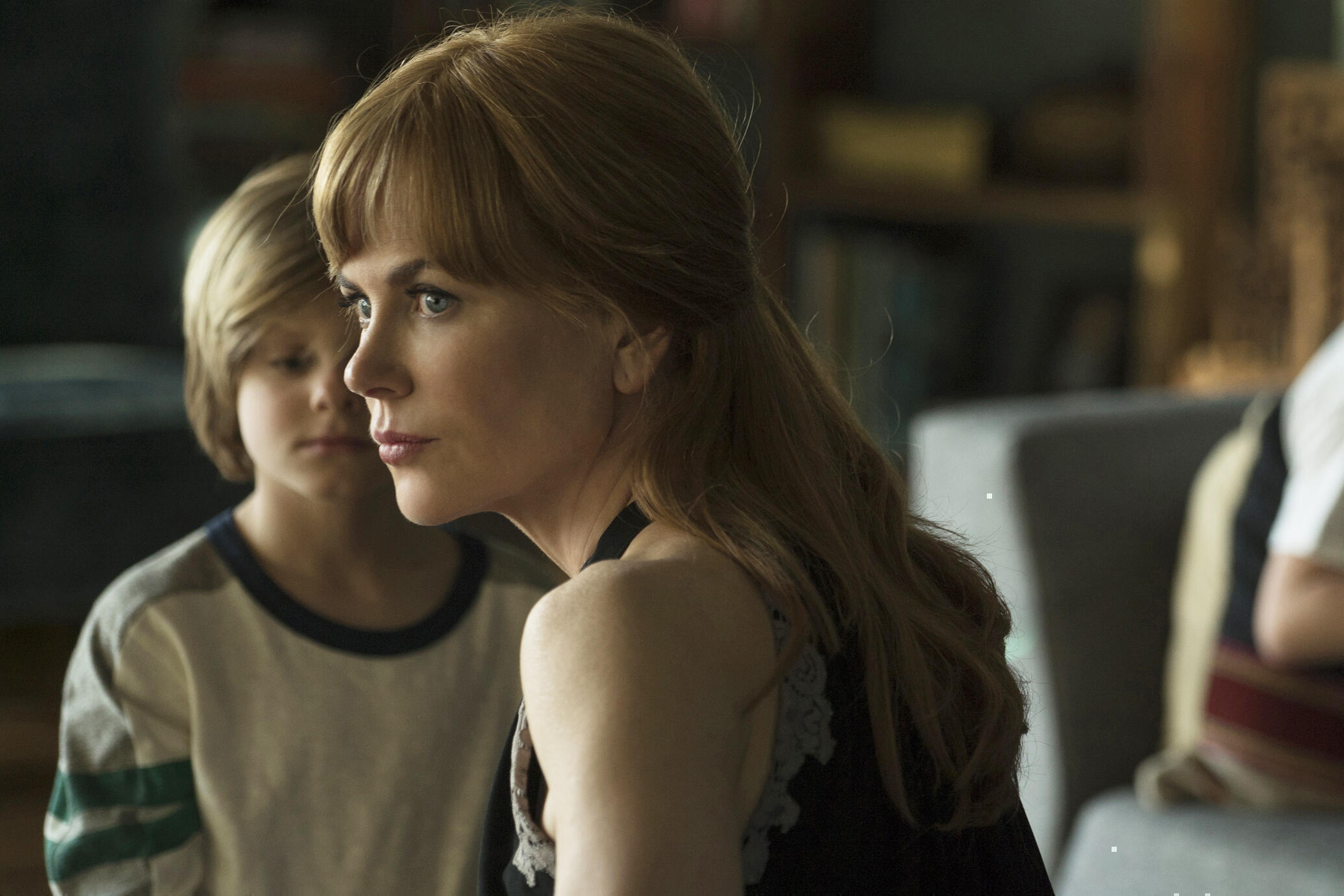 3. The Handmaid's Tale
For a lot of viewers, The Handmaid's Tale hit too close to home in 2017, but it's because of that (and Elisabeth Moss' career-best performance) that Hulu's adaptation of Margaret Atwood's dystopian novel is ranked so high on our list. While the show's brutal depiction of a near-future in which most women have been forced into sexual servitude made it difficult to stomach at times, Moss' embodiment of narrator Offred simultaneously made it hard to look away. It's a testament to Atwood's prescient storytelling that The Handmaid's Tale is still relevant more than 30 years after its original publication, but credit also goes to Hulu and creator Bruce Miller for giving the source material such a tragically modern spin. -- KT

2. Big Little Lies
Though it premiered way back in February, Big Little Lies is the 'Show We're All Still Thinking About' 10 months later. The HBO miniseries, which cleaned up at the Emmy Awards in September, brought a surprising heft to its adaptation of a somewhat breezy novel. Powerhouse performances from the show's trio of leading ladies -- Reese Witherspoon, Shailene Woodley and the indomitable Nicole Kidman in an Emmy-winning turn as the wife of a physically and emotionally abusive husband -- enabled Big Little Lies to soar. Toss in a central mystery, gorgeous cinematography and a ton of real estate porn, and it's no wonder the series was as addictive as it was enjoyable. But perhaps most importantly, Big Little Lies couldn't have come at a more perfect time, kicking off a year in which women banded together against their abusers and allowed their voices to be heard more loudly than ever before. -- LR

1. The Good Place
The Good Place is everything a TV series should be: ambitious, original, clever, creative and forkin' fun. The afterlife comedy's surprise twist in its Season 1 finale was nothing short of brilliant. And just when you thought you had an idea of where it was going in Season 2, Michael Schur & Co. upended your expectations in the first 10 minutes of the premiere. Armed with an amazingly limber cast, eye-popping wall-to-wall visuals and a hilariously deep exploration of morality, the show is a rare gem that continually, expertly changes things up thanks to its deft ability to deploy curveballs, defy tropes and squeeze the most out of froyo. With all due respect to all the good and Good shows out there, The Good Place is simply the best. -- JE