This is the cream of the crop

The TV landscape has lived through a seismic shift over the past year.

Before 2017, it would have been unthinkable that A-list movie stars like Reese Witherspoon and Nicole Kidman would be doing their greatest work on television. Jimmy Kimmel and John Oliver took late night from a pre-bedtime ritual to platforms for policy change. And even as viewers have been focusing more on streaming, performers like Melissa McCarthy made live TV into a national event.

So in choosing the best television performances at 2017, we looked for entries whose work elevated their shows to the next level, something only achievable with that particular performer in the fold.

Here are the top 25 most noteworthy performances, according to TV Guide editors. Entries 25-11 are in the gallery, but if you want to cut right to the good stuff, scroll down to peruse our top 10. And be sure to check out our picks for the 25 best TV shows of the year here!

Best of the Year: 25 Best Performances on TV

10. Melissa McCarthy, Saturday Night Live
Melissa McCarthy cemented her place in the SNL Hall of Fame with her hilarious (and spot-on) impression of erstwhile White House Press Secretary Sean Spicer. What began as a surprise cameo quickly became a cultural phenomenon, culminating in a pre-recorded video of McCarthy's Spicer riding a podium through Manhattan to the strains of Simon and Garfunkel's "The Only Living Boy in New York" to seek approval from his mercurial boss, President Trump. So iconic was the performance that Spicer himself aped it on this year's Emmys. We'll never know exactly how much McCarthy's depiction of Spicer as a belligerent, in-over-his-head shill for the Trump administration contributed to his real-life dismissal, but it certainly didn't help his case. At least we'll always have McCarthy's Spicey to cherish. -- Liz Raftery

9. Noah Schnapp, Stranger Things
It feels wrong to say that the Duffer Brothers were lucky Noah Schnapp was able to carry the main narrative arc of Stranger Things 2 on his shoulders, but it's true. There was little onscreen evidence from the show's first season that Schnapp was as capable as he turned out to be, given his character's disappearance in the first episode. And, in a way, that makes his standout performance in Season 2 even more impressive. Schnapp, all of 13, was tasked with portraying Will, the villainous Shadow Monster speaking through Will, and the Shadow Monster (sans Will). Each required him to deliver a distinct performance. While it might be true that we still know little about the boy (versus the monsters that reside within him), it doesn't mean we can't applaud Schnapp for all the heavy lifting he did this season. After all, it's no small task to portray the personification of all evil, hellbent on the destruction of humankind. -- Kaitlin Thomas

8. D'Arcy Carden, The Good Place
You've heard the saying before: acting is reacting. But when you play an unflappable sentient computerized guide, that might be a wee bit difficult. Add to that Janet's multiple romantic entanglements -- which require a whole range of expression and emotion she's not programmed for -- and Carden's performance becomes even more noteworthy. Unlike any sci-fi tropes associated with AI becoming sentient that came before her, Janet's evolution into a being with its own agenda and desires and needs has been a lighthearted yet devastating journey. In Carden's hands and with her tremendous ability to convey Janet's feelings with her eyes and subtle line readings, Janet, The Good Place's perennially perky Siri/(busty) Alexa, is not only the show's best and funniest character, but perhaps the most human of them all. -- Joyce Eng

7. Reese Witherspoon and Nicole Kidman, Big Little Lies
These two BFFs and Oscar winners have made their names in film, but they have each arguably never been better than they were on their passion project. As busybody Madeline Martha McKenzie, Witherspoon is at her Type-A Tracy Flick best, equal parts hilarious, warm and vengeful -- she treats her grudges like little pets! -- and never cartoonishly evil even as she wields Frozen on Ice in her mommy feud. Meanwhile, Kidman, who won the limited series/TV movie lead actress Emmy (both ladies won Emmys for producing the limited series champ), fearlessly constructed a complicated sketch of a domestic abuse victim. Her standout therapy scenes, in which she calibrates Celeste's silent cry for help with a justifying defense of her husband's actions, ought to be studied in acting classes for ages. -- JE

6. Sterling K. Brown, This Is Us
When Sterling K. Brown won the lead actor Emmy for his work on This Is Us ahead of the Season 2 premiere, it was hard to imagine how he'd top his intense first season performance as Randall, the adopted black son in a white family. But in the show's sophomore outing, we're still glued to the screen, watching Brown consistently give even the most trivial lines (like one of his corny Dad jokes) magnitude, and shatter hearts at the big moments too. On a show initially constructed around a mysterious death, Brown has gradually seized control of the emotional core, and made This Is Us' most gripping stories about Randall and his family -- particularly this season as he figures out how to be a different kind of parent than any of the three he had. -- Malcolm Venable

5. Lena Waithe, Master of None
Lena Waithe has been a serviceable side player alongside Aziz Ansari's character on Master of None, but with the Season 2 episode "Thanksgiving," which she also co-wrote, she proved to be a leading lady in her own right. The Emmy-winning episode chronicles, in a series of Thanksgiving dinners over the course of decades, Waithe's character Denise's coming out to her family. Among the episode's many praiseworthy touches is Angela Bassett's guest-starring turn as Denise's mother, who initially struggles to accept her daughter's sexuality before... if not exactly embracing it, quietly acknowledging it in a loving way. "Thanksgiving" sets itself apart from other coming-out storylines by treating Bassett's character with as much empathy as it does Denise (if not more) and also speaks to the unique struggles faced by LGBT people of color, particularly women of color. Regardless of whether viewers can personally empathize with the story, "Thanksgiving" gives everyone something to be thankful for. -- LR

4. Michael McKean, Better Call Saul
Known primarily for his comedic work, Michael McKean easily proved this year that he can also deliver a dramatic, layered performance deserving of every award (ahem, you screwed up, Emmy voters). As the mentally ill Chuck on AMC's acclaimed drama Better Call Saul, McKean made viewers feel sympathy for a man whose overwhelming arrogance and poor treatment of his brother Jimmy also left them with a strong desire to shove Chuck down a flight of stairs. This is why his apparent tragic end in the season finale hurts us just as much as it will likely hurt Jimmy -- and why we're still clinging to the hope that McKean will be back for Season 4. -- KT 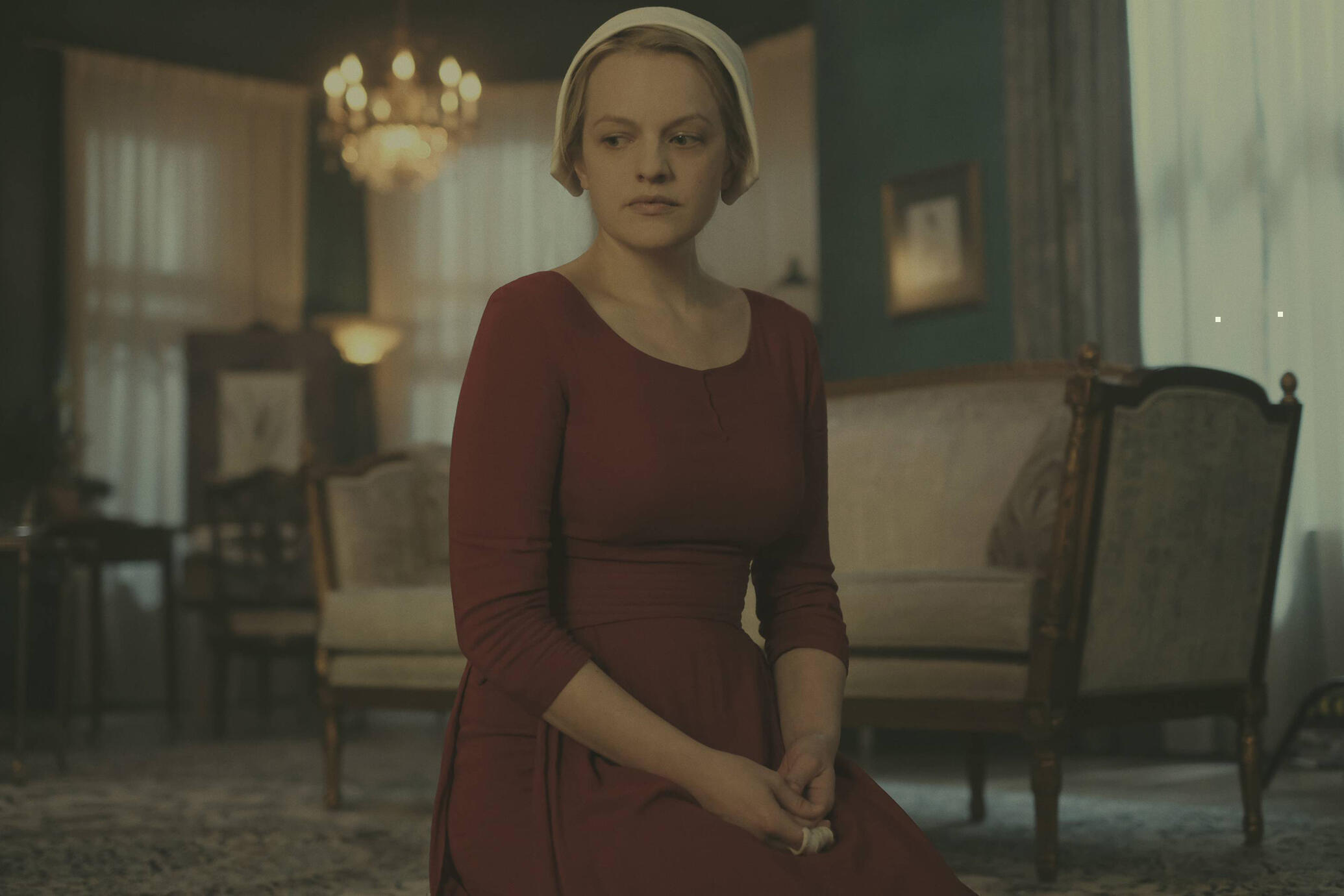 3. Carrie Coon, The Leftovers
If you've never seen The Leftovers before and want to know what the fuss was all about with Coon, all you need to do is watch her beautiful monologue in the series finale (although that'd be like reading the last page of a book before you buy it and frankly, you deserve better, just watch from the beginning, it's worth it). It's a transfixing eight minutes of raw emotion, as she tells her ex-boyfriend Kevin what happened to her since they last saw each other more than 10 years ago. It's a bizarre yet moving, grand yet intimate tale that may not even be true. But Coon's gift is that she's able to make every moment truthful. -- JE

2. Aubrey Plaza, Legion
We mean no disrespect to Aubrey Plaza's talented Legion co-stars, but the versatile actress previously known for her deadpan delivery danced circles around them (almost literally) as Lenny, the primary physical manifestation of the show's psychic villain. Tasked with portraying a number of different versions of Lenny -- drugged-out friend to David Lenny, joyfully malevolent personification of David's inner demon Lenny, manipulative therapist Lenny -- Plaza captivated audiences with a performance that seemed to require minimal effort on her part. And that's pretty impressive when you realize this show requires maximum brainpower to even begin to understand. -- KT

1. Elisabeth Moss, The Handmaid's Tale
Elisabeth Moss' incredible performance in Hulu's adaptation of The Handmaid's Tale is just one of many such performances in her career (she should have at least a couple additional Emmys lining her shelves, if we're being honest), but her turn as Offred is distinct and memorable for the way she is able to perfectly capture and embody the character's pain and suffering with every subtle movement. It's a relatively quiet performance -- especially when compared to some of the other ones on this list -- but that's what makes it all the more powerful.

But it's not just Offred that Moss has perfected; she is also tasked with portraying June, the woman Offred was before she was forced into sexual servitude in Gilead. It's only through this layered depiction that Moss' range and skills become truly apparent. She isn't just portraying a single woman in pain or a woman desperate to be reunited with her daughter and husband; she is many different complex versions of the same woman, who's been forced to bend and not break while being shoved into unimaginable circumstances. She's angry and sharp, she's brittle and broken, she's sarcastic and even downright funny at times. Moss as Offred/June is a fully-realized character and easily the standout performance of 2017. -- KT