Tracey Ullman's State of the Union

Actress-comedian Tracey Ullman portrays a gallery of characters, including popular entertainers such as Renee Zellweger, Helen Mirren and Suzanne Somers; a yoga master; a black airport-security official and a Jamaican caregiver. 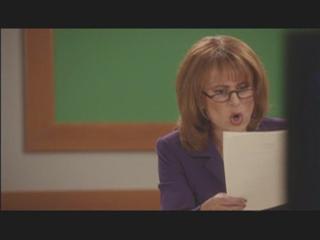 Allan McKeown, the husband of&nbsp;Tracey Ullman&nbsp;who also served as a producer and co-creator of her comedy shows, died at his Los Angeles home&nbsp;on Tuesday&nbsp;after a battle with prostate cancer, Variety&nbsp;reports. He was 67.

The Bachelor: Jason and Molly's Wedding8/7c ABC Let's see: 14 Bachelor and five Bachelorette seasons so far, and when Jason and Molly say their "I do's" (the wedding was taped a little more than a week ago), it'll make marriage No. 2 for the franchise. But hey, romance fans, who's counting!? Gavin DeGraw and "American Idol" alum Jason Castro are the serenaders, and the guest list includes the 2008 Bachelorette DeAnna Pappas (who spurned Jason), and three of the 2009 bachelorettes Jason spurned, not to mention Bachelorette legends Ryan and Trista, whose 2003 wedding received ratings that ABC would dearly love to match tonight.Read on for previews of House, How I Met Your Mother, Gossip Girl and Tracey Ullman's State of the Union.

We always knew Tracy Ullman was quite the impressionist, but we never knew what a true comedic genius she really was until we saw this Dina Lohan sketch from the premiere of her new series, Tracy Ullman&#146;s State of the Union. Best line? "If your daughter&#146;s heart cardiac arrests once in a night club, shame on you. If your daughter cardiac arrests twice, shame on me."

The hilarious British actress, Tracy Ullman (a self-proclaimed 'happy schizophrenic'), is hitting up Showtime with an all-new sketch comedy series featuring, of course, her laundry list of mimicked characters. Among our personal favorites has to be established celebrities. We give her a lot of credit for her Renee Zellweger&#151;not just anyone could pull of the 'chronic narcissistic squint' as well as she can! Watch it now! | More online videosYour take: Which of Ullman&#146;s character&#146;s is your favorite?

State Of The Union: Season 1

1 Season
A group of imps run an assassination company in Hell.
2019 TVMA Comedy, Other
Watchlist
Where to Watch

2 Seasons
Anne Heche stars as a 'relationship coach' and best-selling author who starts life afresh in Alaska after learning that her fiancé has been cheating on her. Executive producers include former 'Sex and the City' writer Jenny Bicks and 'Walk the Line' director James Mangold.
48   Metascore
2006 Comedy, Other
Watchlist
Where to Watch

5 Seasons
Spin-off of "The Big Bang Theory" follows 9-year-old Sheldon Cooper as he grows up in East Texas and attends high school.
63   Metascore
2017 TVPG Science, Comedy, Other
Watchlist
Where to Watch

8 Seasons
A sitcom about a group of teenagers nearing on maturity in the 1970s. They deal with sex, drugs, and rock and roll, as well as disco, leisure suits and, of course, parents.
63   Metascore
1998 TVPG Comedy, Other
Watchlist
Where to Watch