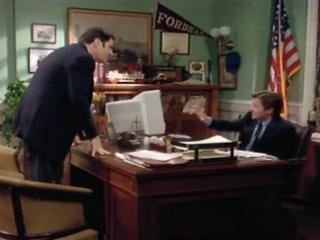 OMG the hair, you guys

NBC has canceled The Michael J. Fox Show, TVGuide.com has confirmed. As first reported by Vulture, NBC has pulled the remaining new episodes of the freshman sitcom and will instead air new episodes of...

ABC has given a pilot order to a single-camera comedy from Spin City's Jeff Lowell, TVGuide.com has learned. Check out the latest pilot news The untitled romantic comedy exposes...

Michael J. Fox Puts His Life Under the Magnifying Glass for His Return to Series TV

After 40 years in the business, five Emmys and two hit TV shows, Michael J. Fox still isn't afraid of a challenge. Case in point: When the TV vet was tasked with running up 100-odd steps at New York City Hall while filming the pilot episode of The Michael J. Fox Show. "After doing it, he said something like, 'That was the most stairs I have literally run in...

The 65th Annual Emmys will pay special tribute to five famous TV talents who died this past year in addition to the traditional "In Memoriam" segment, CBS announced Monday. Study up on all the Emmy nominees before Sunday's show At Sunday's ceremony, which airs... 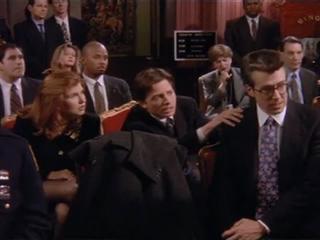 Spin City: The Complete First Season (Bingo Will Not Be Forgotten)

5 Seasons
The Conner clan copes with life in Lanford in a way they never have before.
75   Metascore
2018 TVPG Comedy, Other
Watchlist
Where to Watch

4 Seasons
Once the syndicated series Mary Hartman, Mary Hartman had created a market for satirical soap operas, the networks rushed to the post with comical continuing "dramas" of their own. The most successful product of this genre -- and one of the most controversial -- was the weekly, half-hour ABC series Soap, which debuted September 13, 1977. Put simply, Soap was the sexy saga of two families, the wealthy Tates and the not-so-wealthy Campbells. Ditzy Jessica Tate (Katherine Helmond), the wife of philandering businessman Chester Tate (Robert Mandan), is the sister of Mary Dallas Campbell, who lived with her second husband, blue-collar worker Burt Campbell (Richard Mulligan). Jessica and Chester's children included the sexy, libidinous Corrine (Diana Canova), who ended up marrying defrocked priest Father Timothy Flotsky (Sal Viscusco); strait-laced Eunice (Jennifer Salt), later the wife of convicted murderer Dutch (Donnelly Rhodes), who had escaped from prison with Chester after the latter had confessed to the murder of Jessica's paramour, tennis pro Peter (Robert Urich) (who happened to be the son of Burt Campbell!); and young son Billy Tate (Jimmy Baio), a typical hormone-driven teenager who would "mature" to the extent that he was stalked by a scorned lover. The Campbell children included Mary's sons by her first marriage: Danny Dallas (Ted Wass), a young mobster, and Jodie Dallas (Billy Crystal), a homosexual who nonetheless enjoyed several heterosexual relationships, one of which produced a daughter. Among the many other characters were Jessica Tate's father, "The Major" (Arthur Pierson), a senile, shell-shocked WW2 veteran; the Tates' snide, sneering butler Benson (Robert Guillaume, who later starred as this character in his own sitcom); Detective Donahue (John Byner), who fell in love with Jessica while searching for the fugitive Chester; Mafia daughter Elaine Lefkowitz (Dinah Manoff), who, before being kidnapped and bumped off, forced Danny into a romantic relationship; Carol David (Rebecca Balding), the conniving mother of Jodie's baby; and "El Puerco" (Gregory Sierra), a South American revolutionary who became enamored of Jessica. The various and sundry plots and subplots wending their way through Soap's four seasons are far too multitudinous and complex to explain here. Suffice to say that the storylines incorporated false murder charges, amnesia, suicidal lesbians, interracial marriage, religious cults (in this case a group called the "Sunnies"), UFO abductions, extraterrestrial clones, satanic possessions, and banana-republic firing squads. In other words, Soap was just your average, typical soap opera, but with a laugh track. Even before the series debuted, Soap was under attack from a vast array of "clean up TV" brigades, religious organizations, and self-styled social arbiters. On the other hand, the series had scores of high-profile defenders who recognized Soap for what it truly was: A pungent lampoon of modern manners and mores, served up in a humorous and exaggerated fashion with no malice intended. The series ended on April 20, 1981, with its traditional season-ending "cliffhanger" -- which in this instance would not be resolved the following season.
1977 TVPG Comedy, Other
Watchlist
Where to Watch

10 Seasons
A nostalgic comedy series about kids growing up in a dysfunctional family in the 1980s.
53   Metascore
2013 TV14 Comedy, Other
Watchlist
Where to Watch

2 Seasons
Comedy about a ghoulish household, created by the cartoonist Charles Addams.
1964 TVG Family, Comedy, Other
Watchlist
Where to Watch