Oprah Winfrey travels around the world to interview celebrities, newsmakers and thought leaders. 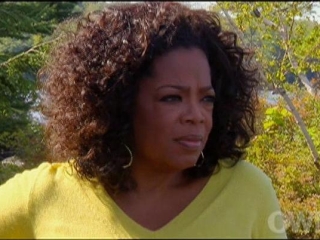 Top Moments: True Blood Sunbathes in the Nude and Breaking Bad Slaps It Out

Our top moments of the week: 13. Better Late Than Never Award: Pretty Little Liars' penultimate episode not only reveals Red Coat to be CeCe Drake (OK, not a shocker there), but a mysterious young guy named Travis tells Hanna that he was there the night of Wilden's murder and knows it wasn't Ashley Marin. Although he's reluctant to tell the police what he saw due to "bad blood," he goes down to the station in the final moments. Will Hanna's mom finally go free? Or does A have a plan to keep her locked up? 12. Worst Edit Job: For weeks now on...

Lindsay Lohan: I've Created a "Whirlwind of Garbage" Around Myself

In her first sit-down interview since completing her court-ordered 90-day stint in rehab,&nbsp;Lindsay Lohan&nbsp;told&nbsp;Oprah Winfrey&nbsp;that she's addicted to alcohol and chaos, but is committed to staying on the straight and narrow from here on out. "I'm my own worst enemy," the actress said on&nbsp;Oprah's Next Chapter&nbsp;Sunday. "There are so many powers greater than me in the world, and I've been blessed and lucky enough to be given a gift to share with other people, and I think for so long I kept that so locked down and chained down, just by creating this whirlwind of garbage around myself."

Lindsay Lohan is speaking out for the first time in the latest preview for her sit-down interview with Oprah Winfrey. "I'm my own worst enemy, and...

VIDEO: Oprah Winfrey Asks Lindsay Lohan "Are You an Addict?" on Next Chapter

It looks like Oprah Winfrey&nbsp;didn't pull any punches when she interviewed Lindsay Lohan for Oprah's Next Chapter. In a new sneak peek from the episode, airing Aug. 18, Winfrey is seen asking Lohan point-blank, "Are you...