Victor Garber on Deception, His "Coming Out"

Everyone's a suspect on NBC's Deception, the freshman whodunit series about young detective Joanna Locasto (Meagan Good), who goes undercover to find out who killed her childhood best friend, Vivian Bowers. Leading the way in ethical dubiousness is Robert Bowers (Victor Garber), the family patriarch and Vivian's father. By the show's third episode, viewers know that Robert is not only championing a new drug that has exhibited deadly side effects in trial patients, but also recently ended an affair with his secretary, fired her, and then scared her into silence by dispatching an employee to break both of her brother's knees with a hammer. Robert hires Joanna as his personal assistant, thus providing her with an inside track to the family's professional and personal inner workings &mdash; but how much does he know about her true motives? Read our full interview with Garber to get his take on Robert's capacity for evil, his on-screen marriage, and the one thing he thinks could tear the Bowers family apart.

Looks like Gibbs and the rest of the NCIS team are going to need even more help than they thought to nab the Port-to-Port killer. Exclusive: Meet NCIS' newest team membersFormer Dawson's Creek star Kerr Smith has booked a season-ending, two-episode arc on the CBS crime drama, TVGuide.com has learned exclusively...

From one of Julia Robert's students in Mona Lisa Smile to one of Rory's best Yale pals&nbsp;on Gilmore Girls, Krysten Ritter is working with the best in the business and getting so much exposure, you can catch her on TV more than once a week. Taking a break from Gilmore's bright-eyed Lucy, Ritter plays another coed tonight on Fox's 'Til Death (8 pm/ET), starring Everybody Loves Raymond's Brad Garrett. And when you're done laughing up her comedy spot, check out her other Fox appearance this wee

This Monday's milestones....&mdash; Gaining 500,000 total viewers versus last week, Prison Break (8.97 million) had its best outing since Sept. 18. Similarly going to school on repeats of Wife Swap and How I Met Your Mother was CW's Everybody Hates Chris, which hit a season high with 3.56 mil.&mdash; With a 500K week-to-week gain, Heroes set a new series high of 14.73 mil.&mdash; Justice was up 300,000, but even at 6.5 million is still shy of its former Wednesday audience.&mdash; A special "one-time" (uh-huh... ) Monday outing of Friday Night Lights averaged 8.29 million total viewers, the freshman drama's best numbers ever, by a full million, and NBC's best performance in that 10 pm slot since the Oct. 9 Studio 60 on the Sunset Strip. (Mind you, that was opposite a CSI: Miami repeat and, well, What About Brian.)FNL fans, be sure not to miss today's Interviews &#38; Features Q&#38;A with exec producer Jason Katims. 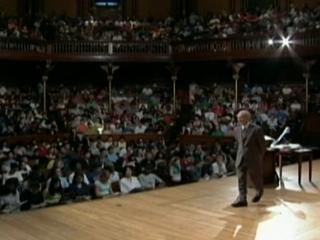 Justice: What's The Right Thing To Do