Law & Order: SVU Goes Back Into the Light After a Season of Darkness

It's understandable that Mariska Hargitay gets a little choked up when talking about the most recent season of Law &amp; Order: SVU. The long-running NBC drama kept viewers, and the show's leading lady, on its toes all season thanks to the #SaveBenson arc, which saw Olivia kidnapped, drugged and...

It's understandable that Mariska Hargitay gets a little choked up when talking about the most recent season of Law & Order: SVU.

The long-running NBC drama kept viewers, and the show's leading lady, on its toes all season thanks to the #SaveBenson arc, which saw Olivia kidnapped, drugged and abused by serial rapist William "The Beast" Lewis (Pablo Schreiber). She escaped but subsequently spent almost the entire season haunted, first by the memory of the events and then by Lewis' eventual escape from prison and suicide. "There was a lot of darkness," Hargitay told reporters earlier this month.

Fortunately, Benson's dog days are over. When Law & Order: SVU returns (Wednesday, 9/8c, NBC), Olivia will be preoccupied with another man in her life: her newly adopted baby boy Noah. "To be in darkness and fear and all that that she went through and losing faith in humanity and then having, like, a miracle lobbed into your world, a light. It felt like a comet, really," she says. "I think that having a child changes everything and will redefine her."

Indeed, the promos for the new season say it all. Rather than showing Benson in her office or at the scene of a grisly crime, SVU focuses on Olivia at home lovingly doting on her child. "I think she was given permission also to have her own life after last year," executive producer  Warren Leight says.

Leight particularly points to Benson's final confrontation with The Beast to explain the significant impact Noah will have on how Benson's home life will bleed into her decisions at the office. "Last year she went back into the granary when she knew William Lewis was alone there with a young woman hostage," he said. "Would she make that decision now when there's somebody at home who's dependent on her? How does that affect your judgment in life and death situations?"

Also impacting Olivia's thought process is her promotion midway through last season to sergeant. Although someone else (Donal Logue's Lt. Declan Murphy) was temporarily put in charge for the last several episodes, Olivia will be calling the shots this year. "Now I'm deciding: Do I go to the crime scene or do I stay in my office? Do I delegate and give orders and be in charge of people or do I stay home with this kid?" Hargitay said. "Everything is different and everything requires much more energy and thought."

Work will also require extra attention because of a shakeup in the squad. Following Amaro's physical assault of a suspected sex offender, he has been reassigned to patrol duty as a uniform cop and has also been in anger management. "Everything has fallen apart for him. He's picking up pieces and trying to figure out who he is and what he wants," Danny Pino said. "Right now his world is so upside down that he's just trying to go day by day."

In Amaro's place is the rough-around-the-edges Det. Sonny Carisi (Peter Scanavino). "He's a total outsider. He's brusk and he doesn't really get the nuances and he's not very experienced so he puts his foot in his mouth a lot of times," Scanavino said. "But he's learning. He's picking it up. I think he's a good detective, but he's got a lot to learn on how to like approach cases."

Despite his new gig and his replacement within the squad, Amaro won't be completely gone and forgotten. "He brings cases to SVU or he knows about certain cases that SVU then catches so they are inclined to go to Amaro and find out what he knows on the street level as to what is going on," Pino said.

Fall TV popularity contest: Which new shows won you over?

It also helps that Amaro has someone in his corner — Rollins (Kelli Giddish), whom it was revealed at the end of the last season was sleeping with Amaro. "This season you're going to see her really support him," Giddish said. "It doesn't mean that they're in love and they're going to get married and have babies, but it does mean she fights for him in a different way now."

Amaro's good deeds will eventually help him get his old job back. "For him to be back in the fold, I think is a way for him to see that he's heading in the right direction," Pino said. "He's not the same. He's trying to deal with his anger and he's trying not to get in trouble and you know when you're trying not to get in trouble, usually it finds you, and that inevitably will happen to him."

Could that trouble be because of his (possibly) ongoing secret romance with Rollins? "It makes for a volatile environment when you're trying to keep a secret from a room full of detectives. Any little slip, any thing that is uncommon or overplayed or underplayed in your reactions to each other — these guys are sharp, they pay attention to human behavior," Pino said. "At any point, it could blow up in their faces."

Watch a clip of Benson with her new baby from the Law & Order: SVU season premiere: 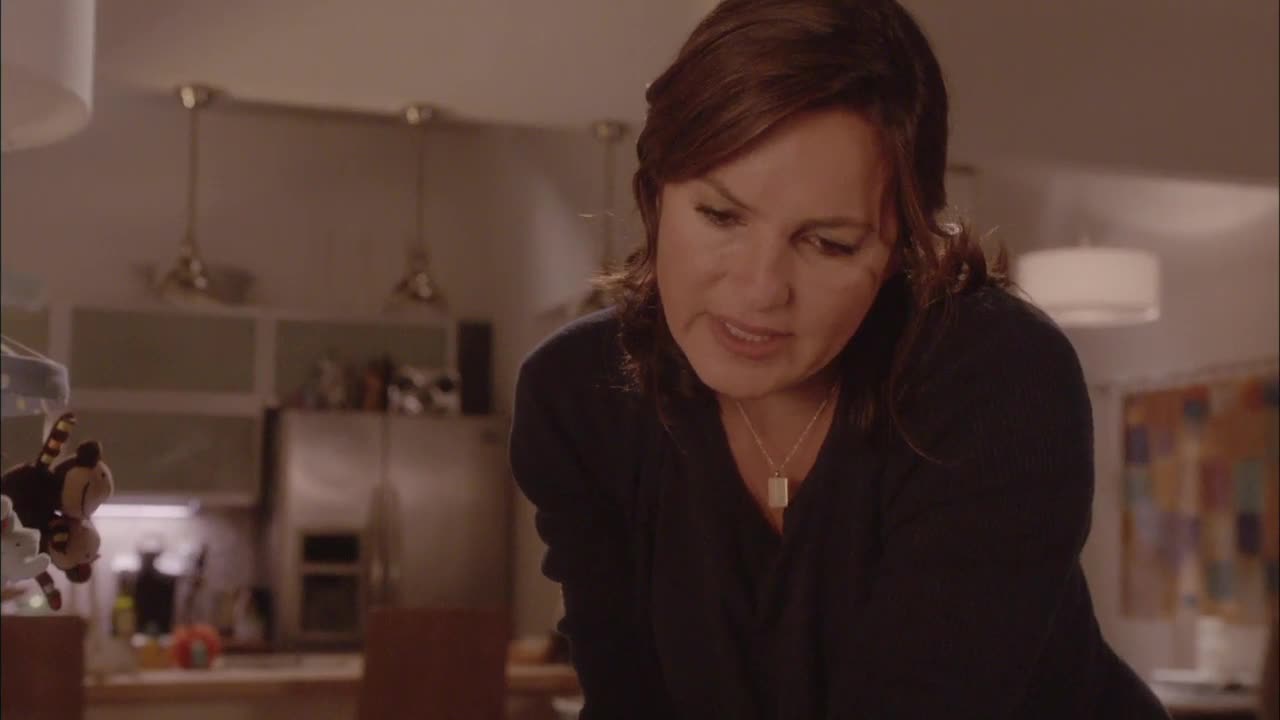