Erica Messer can't think of a more perfect day for Criminal Minds to turn 10."Episode 10.1 airs on 10/1. How cool is that?" Messer tells TVGuide.com. "It wasn't planned. We didn't know that until we started back up and we were well in the swing of things, and [CBS] mentioned that the premiere would be a little later than usual because of Extant and Survivor. So it's great timing."Fall TV: Hot scoop on your favorite returning showsBut for Messer, "seven" is the magic number for Season 10. After Jeanne Tripplehornleft the series in the Season 9 finale, Messer told TVGuide.com at the time that she wasn't sure if they would replace her or just stick with the remaining six BAU members. "It was a really big, long conversation with the network and the studio, and they said, 'Let's go ahead and try to find someone new,'" she says.Enter Jennifer Love Hewitt as Kate Callahan. The actress was not only ...

Erica Messer can't think of a more perfect day for Criminal Minds to turn 10.
"Episode 10.1 airs on 10/1. How cool is that?" Messer tells TVGuide.com. "It wasn't planned. We didn't know that until we started back up and we were well in the swing of things, and [CBS] mentioned that the premiere would be a little later than usual because of Extant and Survivor. So it's great timing."

But for Messer, "seven" is the magic number for Season 10. After Jeanne Tripplehorn left the series in the Season 9 finale, Messer told TVGuide.com at the time that she wasn't sure if they would replace her or just stick with the remaining six BAU members. "It was a really big, long conversation with the network and the studio, and they said, 'Let's go ahead and try to find someone new,'" she says.Enter Jennifer Love Hewitt as Kate Callahan. The actress was not only on the top of the network's list because of her days on Ghost Whisperer, but she and Messer go way back to Party of Five."I knew her many, many moons ago at Party of Five,'" Messer says with a laugh."So it was sort of, 'Well, she just had a baby. We don't know if she wants to go back to work or not.' I sat down with her and caught up and it was like no time had passed. I then told her that the show is different from what she's been doing because what she's been doing is being No. 1 on the call sheet, having to be there 14 hours a day every day. ... I think it was the combination of the actors on the show and the idea of doing something different. She has never fought crime like this. She's an amazing addition. She's laughing it up with the cast and crew and certainly believable as an FBI agent on screen. It's been a breath of fresh air for us."But just who is Kate Callahan? What's her secret? Get the scoop and more from Messer below.1. Undercover bossKate is not who you think she is when we first meet her. That's because she's undercover collaring a perp before she heads to the BAU to interview with Hotch (Thomas Gibson), who hires her on the spot. "You see her interacting with a criminal in a way you don't see our team doing it, which is she has to act like she enjoys being with this person before turning the tables on him," Messer says. "One of the things she says to Hotch is, 'It takes me a couple of months to catch one offender. You catch a new one every week. How do you do that and how do you not let it take over your life?' She's got to adapt to that skill set, which we'll see throughout the season."Watch a sneak peek of the scene below: 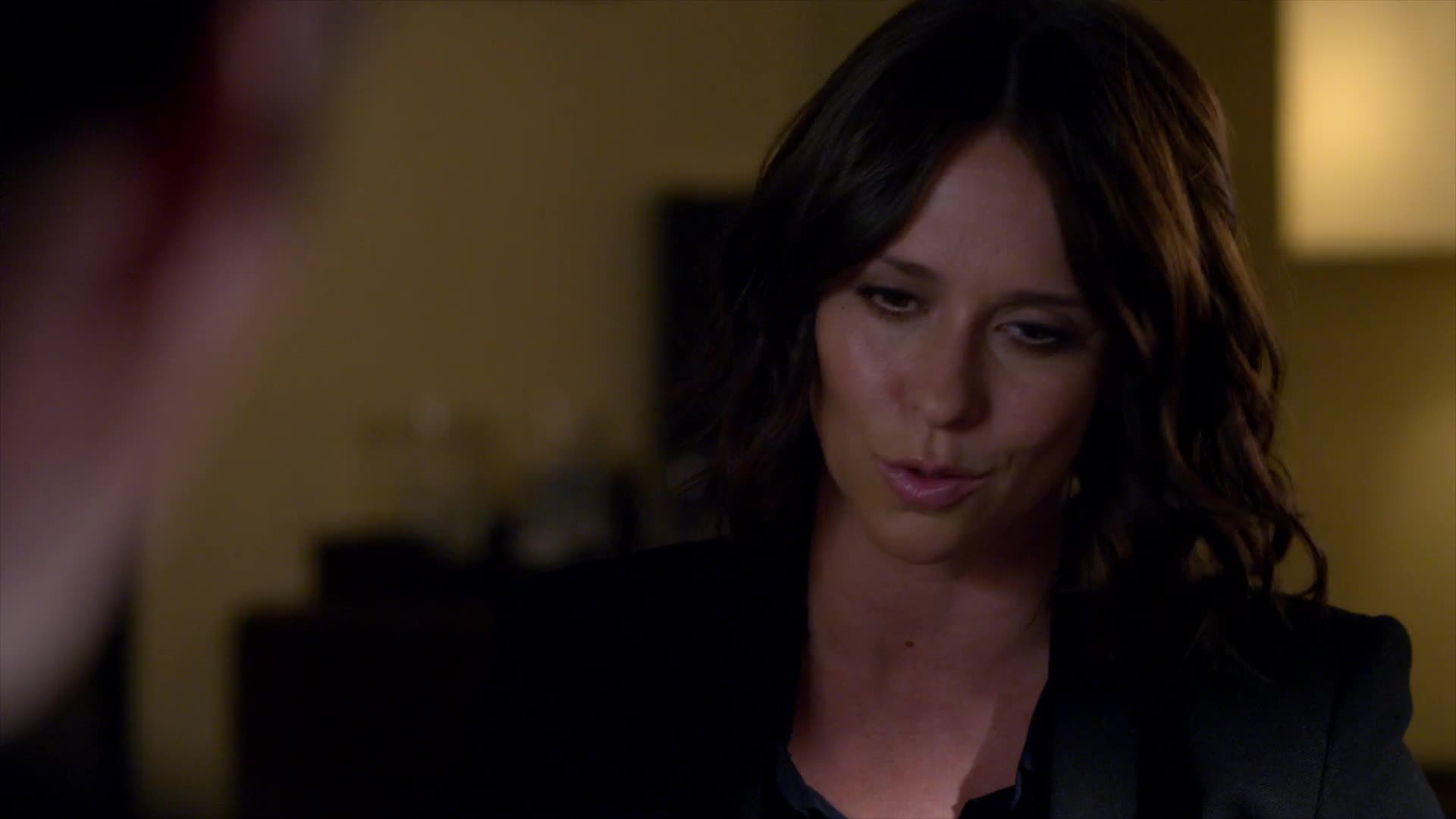 0:54
Watch Now
2. Kate's secretLike the introduction of Blake (Tripplehorn), Kate has a mysterious backstory that viewers will get a peek at when we follow her home at the end of the season premiere. But unlike Blake, hers won't be tied to an unsub or even keep you guessing that long. Hotch and Rossi (Joe Mantegna) already know her secret, which involves a plane crash, and she will tell Reid (Matthew Gray Gubler) in the third episode. "Something pretty tragic happened in her life, but she wasn't a victim necessarily," Messer says. "Her secret is not like Blake's at all. She's been dealt a hand that most people aren't dealt. There's no secret in that, but she also doesn't want it to be what defines her, certainly to the rest of the team." The event is also partially what spurred Kate on to become an FBI agent. "She was on her way there with her psychology degree, but this happened at a very important time in her life," Messer says. "It was her trigger, so to speak, and it informs why she's as strong as she is. She's very tough, smart and fearless."

3. The long road to recoveryAs we previously reported, Garcia (Kristen Vangsness) will be suffering from PTSD as a result of shooting the pseudo-nurse who tried to poison Reid in the season finale. In the second episode, she will meet with the guy in prison and get some closure, but look for it to pop up again. "[Meeting him] will certainly help, but I don't think you move on from traumatic events completely, so it will come up here and there," Messer says. "Morgan and Hotch really try to help her." In better PTSD news, Reid will not fall back on Dilaudid after his brush with death in the finale. "He becomes even wiser," Messer says. "You see how he's dealing with it, but there's nothing tragic. That's definitely by design. He's had a lot of tragedy, so maybe the surprising thing is we don't go there."4. Jane Lynch is (maybe) back!It's been six years since we last saw Reid's schizophrenic mom Diana, but now that Gleeis ending — with a shortened season at that — chances are looking very up for her to finally return. "We've been teased throughout the years that we could have her. We don't want to get our hopes up again, but we're starting to think of ideas," Messer says, adding that a return would not occur until the second half of the season. Diana was most recently mentioned last year, when Reid learned that she's been doing well and went on a supervised trip to the Grand Canyon. Because of that, Messer wants her return to be in a similarly positive vein. (Maybe she's released from Bennington Sanitarium?) "The thing that brings her back can't be sad and heartbreaking. We've seen that already," she says. "We need to have a big splash to bring her back and we want to arc out what that could be."5. Don't scratchThe season's still young, but Messer promises that the fourth episode is the show's "grossest episode yet." There's not much in the way of blood and gore, but the hour, titled "The Itch," will be heavy on creepy crawlers, as it follows an unsub who believes he has cockroach larvae in his body. "He tortures people with live cockroaches because he wants them to believe him," Messer says. "We had 1,500 live cockroaches on set. The psychological torture of this one is victim and audience alike! I kept squirming and closing my eyes when I watched it. It will creep people out!"

6. A love letter for you — yes, you!To celebrate the big 1-0, Messer is planning a major midseason episode — similar to last season's 200th episode — that will have many callbacks and possibly old faces from the last nine years. "I can't talk about it yet, but I've got an idea. It's going to be a giant team episode because those are my favorite," she says. "It's going to be a love letter to fans who've been with us all 10 years."7. Replicating The Replicator (story line)For the second time ever, the series will feature a season-long unsub, who will be introduced at the end of the premiere after the BAU thinks they've closed the case of the week, which involves human limb collecting. Technically, they do solve the case, since the new, overarching one spans beyond chopping off some arms and legs. (Hint: It involves a wide-reaching network.) "The unsub is only part of the puzzle," Messer teases. After touching on the case midway through the season, Messer plans to wrap up the story line in the last two episodes. "It will culminate in the finale. We try to break our last two episodes of the year as a movie. We know pretty much how Part 1 would end and how the finale would end. You'll probably think one thing [after you see the premiere], but it's bigger than you think."Criminal Minds airs Wednesdays at 9/8c on CBS.(Full disclosure: TVGuide.com is owned by CBS.)